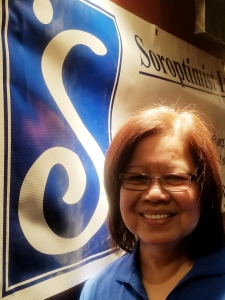 Lala Gonzales, President & Board of Director

Lala was born in the Philippines and immigrated to the United States of America in 1977. She is currently retired having worked in the hospitality industry for over 40 years. She joined the Soroptimist International of Dallas in 2014 after being invited to that year’s A Star is Born Award Luncheon. The event really touched her and she was amazed at what the organization does for local women and girls. Since joining the club, she has held the positions of Corresponding Secretary, Nominating Committee Chair, Board Member, Audit Committee Chair, and Recording Secretary. Lala and her husband lives in Carrollton, Texas. They have one son and three grandchildren. Her interests include scrapbooking, reading, and traveling. And of course, what gives her the greatest enjoyment is spending time with her grandchildren.

Lala can be reached at: sidallaspres@gmail.com

Ginny Lloyd, Treasurer & Board of Director

Ginny’s aunt once asked her if she was involved in any community service or non-profit groups and she said yes – Soroptimist. After coming to Dallas on her own, she needed to expand her group of friends beyond work. And she wanted to support my community. A couple ladies from work invited her to a meeting and asked her to join SI Dallas in 2009. Since then she has been actively involved with their events and regional meetings and made some great friends. Besides this club she is active with my Alumnae sorority group serving as treasurer. She is on a bowling league hitting the lanes every Wednesday night. Ginny likes to travel, but she also likes to sit at home reading a book. She is an accountant by profession, hence always being asked to be a treasurer.

Ginny can be reached at: sidallastreasurer@gmail.com 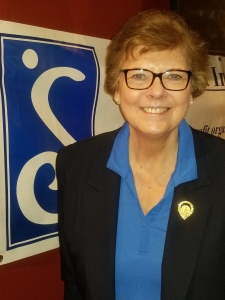 Nanell Mawbey, Delegate & Dream It Be It Committee Chair

Nanell was born and raised in Red Bluff, California.  She graduated with a degree in Sociology and a minor in Psychology from California State University, Chico and received her Masters in Social Welfare from University Nevada, Reno.  She is currently working towards her MBA Masters Essentials through Kansas University. Nanell has been in the banking industry for 46 years, starting as a Teller and moving on to Banking Center Manager.  In addition, she has held the positions of Consumer Loan Officer, Mortgage Loan Officer, and Commercial Loan Officer.  Currently, she is a Personal Banker with Legacy Texas with an emphasis on Business Development. Nanell has been a member of Soroptimist International for 37 years. She joined the club at the request on her employer and to be more involved in Community Activities.  She stayed because of the mission and the knowledge that we are helping to empower women and girls. Nanell started in Carson City, Nevada and carried her membership to San Francisco, California, Camarillo, California and now to Dallas, Texas.  She has been on board positions in Carson City, San Francisco, and Dallas, serving as President of all three clubs. She is also active in American Business Women’s Association as well as other Community Service Projects. Nanell lives with her husband in Carrollton, Texas.  She has two children and four grandchildren.  She enjoys cooking and reading as well as attending events and conferences.  She believes that it is important to keep learning and growing.  As women, we should take every opportunity to educate ourselves both professionally and personally.

Fatuma Mwende, Board of Director 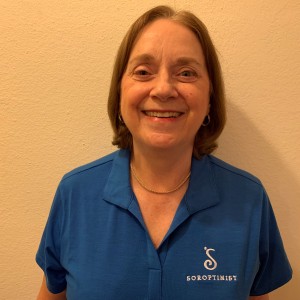 Debra Purdon has been a member of Soroptimist International of Dallas since 1979.  She has served in numerous officer and committee chair capacities including twice as President, most recently for the 2017-18 club year.  Debra was very involved with Camp Soroptimist, a camp for the disabled founded by the Dallas Soroptimist Club in 1947.  She served as its Board Chair and was instrumental in recruiting community board members and transitioning the camp to a community run non-profit. Debra is a CPA and is Accounting Director at Atrium Windows and Doors, Inc. where she has worked since 2007.  Debra has worked in various financial management positions within the banking and manufacturing sectors during her career.   Debra and her husband Bill enjoy playing tennis and traveling, including spending time in Breckenridge, Colorado.

Theresa Ream, Board of Director

Theresa was born in California, but raised in Havana, Illinois. When she was 12 her family relocated to Texas, she graduated from South Garland High School and has lived in The Colony for over 25 years. She has been married for over 30 years and has one son who is in Medical School and married. Theresa is currently unemployed and seeking new opportunities. She has worked in the Real Estate/Mortgage Industry for over 30 years and holds a DE CHUMS FHA and VA SAR underwriting licenses.  Currently, she is embarking to obtain her Bachelor’s Degree in BAAS, a Real Estate License so she can become her own boss. Her dream is to achieve being her own boss one day, because it will allow her to travel to see places on her bucket list.  She wants to rely on herself, and control her future rather than someone else having control of it.  Theresa has been a member of Soroptimist International of Dallas since 2009, but unofficially in 2008. She has served as club President, Vice President, Director, Recording Secretary, District III Recording Secretary, South Central Region District III WOA Region Chairperson, Chairperson on various committees held within our club. In 2007, her son graduated High School and all of her volunteering, etc. stopped.  She was laid off in 2008, and Angela Standish introduced her to a Soroptimist Social Networking Event.  The members were very supportive and helpful in that time. She loved the mission of the club, and the support it gave to the community. She needed to fill the void of being a part of something again after her son graduated. Theresa’s hobbies include the love of reading, traveling, going to the beach, volunteering to help others in the community and she also enjoys most activities that are outdoors when it is warm weather.

Angela has been involved with the Soroptimist organizations since 1985, whereby she was the Charter Treasurer for the Venture Club of Phoenix. During her tenure in Arizona, Nevada and Dallas, since 2008, she held every office at the club level many times, as well as Region Secretary, Treasurer and District Director. Angela is an accountant by profession and in her spare time she enjoys traveling and spending time with family and friends.